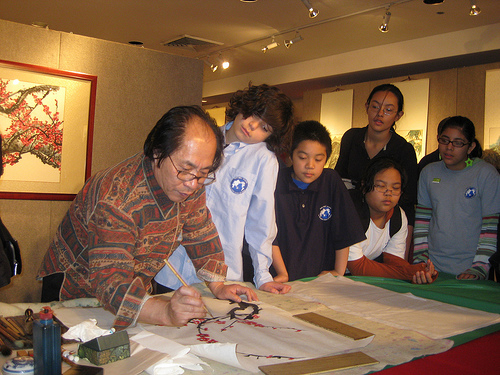 School trip to learn about Chinese calligraphy and food

In recognition of its potential as a model Chinese language program for the U.S., strong local leadership, demonstrated commitment to international exchange and collaboration, and global vision for the future, the East-West School of International Studies has been accepted as a member of the second cohort of schools in the Hanban-Asia Society Confucius Classrooms Network.

Along with a start-up cash award of $10,000, EWSIS will work to enhance their existing Chinese language program through unique opportunities such as being matched with partner schools in China and having students, teachers and administrators conduct exchanges and joint projects. They will also receive 1000 volumes of Chinese language learning materials.

At this small grade 6-12 school, students at EWSIS study Mandarin, Japanese, or Korean each year they attend and most graduate with at least the equivalent of a first-year college level of proficiency. Chinese teachers use a workshop model with skillful incorporation of multimedia and culture studies to engage students and promote effective language learning. According to Mei-Chin Chang, a Chinese teacher at EWSIS who wrote the successful proposal, “learning Chinese language cannot be separated from understanding the culture.” Last year, students of Chinese interviewed students of Korean and Japanese and later used Venn diagrams to examine the similarities and differences among the three cultures celebrating Lunar New Year.

The Chinese program at EWSIS provides its service to parents and the community as well. For two years in a row,  EWSIS sponsored a free 12-session Chinese class open to the East-West community. There have been more than sixty adults taking their Chinese class on the weekends and the number of the students in the Chinese Program is expecting to grow with new funding next year.

Located in Flushing, New York, one of the most culturally diverse neighborhoods in the country, EWSIS prepares students for a career in an international world by supplementing their studies with proficiency in an Asian language.  With the understanding of the important role Chinese language plays in the rapidly globalized world, the East-West Chinese program has gained strong support from students, parents and community. Through this partnership, EWSIS will be able to drastically improve its Chinese program for the benefit of its students and the community.

The Hanban-Asia Society Confucius Classrooms Network has been established with the support of an International Expert Advisory Committee and in partnership with Hanban, a non-governmental agency supported by China’s Ministry of Education that supports the teaching and learning of Chinese language and culture in all corners of the world. The Network is more than just an attempt to recognize excellence in Chinese language teaching – it is the beginning of an ongoing process of field building with the goal of establishing high quality, sustainable Chinese language programs in all regions of the U.S., and one important step toward strengthening Americans’ understanding of China.

About Asia Society and Hanban's Partnership

Hanban and Asia Society have collaborated over the past few years to promote educational initiatives aimed at strengthening the teaching and learning of Chinese language and culture in the United States. Hanban has partnered with the Asia Society in recognition of its network of connections in US education and real experience designing and developing schools that promote global competency for American students.